With the introduction of blockchain technology the internet and how people interacted with it changed. Those who use it have an added layer of security and have a way to prove digital ownership of virtual objects without others first making a claim. The technology continues to evolve and more industries continue to benefit from its existence, such as the video game industry.

There was a time when Xbox and Sony both discussed the idea of allowing players to purchase items using the achievement points they acquired when they played games.

For those who do not know about achievement points, here’s a quick example of them. A player can acquire an achievement point by doing something unique in a game, such as dispatching an enemy in a difficult way or beating the entire game. A game’s development team would create a large list of these achievements as a form of checklist for the players to complete while they played.

The more achievement points a player had, the more points they had on their account for everyone to see. Xbox and Sony planed on allowing players to use their points to pay for digital accessories for their account, content they could use in the games they played, and, if a player saved enough, even purchase an entire game they could play.

Why did Xbox and Sony scrap the idea? Because people were able to find a way to hack their hardware to make it look like they had completed achievements for games they never owned. It was difficult for the support team at both companies to tell the difference between a legitimate player and one who had hacked their system without physically seeing the console.

That’s where blockchain technology could come in and there are games out right now that use this technology. For those interested in checking the games out on this list, you may want to have already invested a cryptocurrency in order to play as many of them required players to have some to get started. This includes having a wallet account created to use on the game’s account.

This game was created in the middle of a medieval setting where players go head to head against one another, attempting to collect gear in a constantly changing digital ecosystem. The thriving ecosystem in EtherWarfare features a marketplace where everyone can offer their unwanted gear to others who may find more use out of them. Due to EtherWarfare operating on the Ethereum blockchain the game uses Ether as the digital currency, which players can gain by selling their gear on the marketplace or by buying it from their Ethereum account.

The items in the game vary in value based on a seven different ranks of rarity with common (white) being the lowest rating and godly (yellow / multi-colored) at the highest. If players find themselves with an abundance of similarly ranked gear they can’t reliably sell on the marketplace, they can visit the game’s Blacksmith to combine the two pieces of gear. However, this tactic can impact players negatively or positively. It takes Ether to use the Blacksmith, and the overall value of the new item may not add up to the total cost it took to create the item.

Those interested in joining EtherWarfare should know the developers have plans to continue to add on to the game by creating new player versus player events. These events feature players using their acquired gear in combat against one another.

This game requires players to connect their MetaMask account with the game. 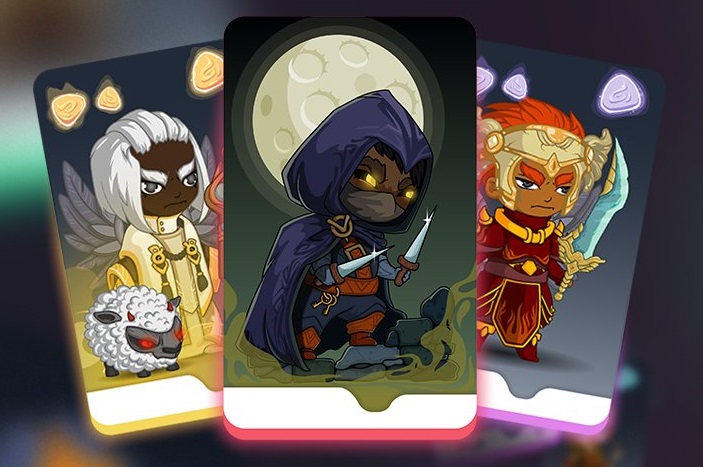 This fantasy roleplaying game contains a variety of unique warriors for players to collect and train thereby increasing their warrior’s value on the market. Similar to EtherWarfare, Ether Quest works through the Ethereum blockchain and uses Ether as an internal currency. The game requires any player starting out to go to the game’s marketplace and use Ether to purchase a hero, thus, in order to play any new player must have their own amount of Ether they purchased outside of the game.

As players train the warriors under their command they can send them to battle in the game’s Arena or Tournament to attempt to gather up Ether as a reward. Of the two, the tournament offers the most potential to earn Ether, but takes significantly longer. If a warrior no longer proves a worthy investment players can sell them on the marketplace to anyone looking for a stronger character to use.

The developers behind Ether Quest require all players to have an account set up with MetaMask. 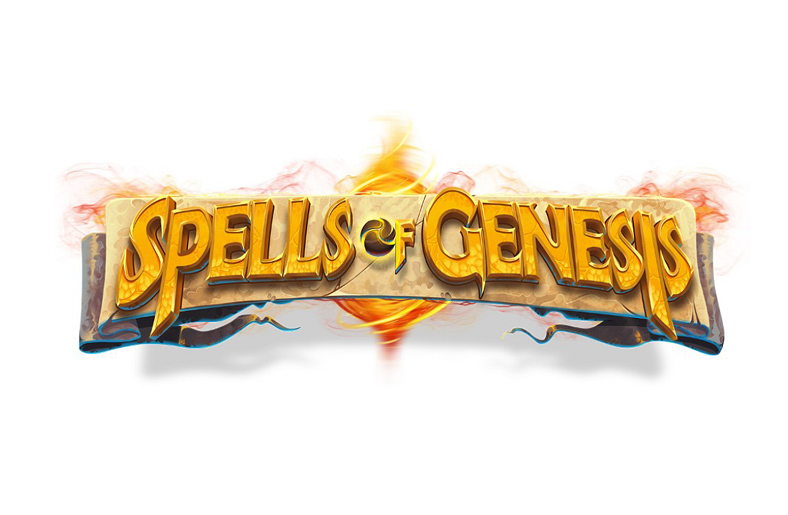 This game trading cards to the next level by requiring players to use their cards in an arcade shooter where they attempt to attempt enemies using magical spells. Additionally, Spells of Genesis shakes up on the cryptocurrency front by running from Bitcoin’s blockchain instead of Ethereum’s.

Players attempt to collect cards categorized from six different elements: Earth, Ice, Fire, Water, Light, and Dark. A card’s element determines the types of spells it will do, such as a water card will have healing spells while a fire card come with damaging spells. A player creates a deck using four cards and they must have at least four before they can play. To make stronger cards a player must fuse together duplicates.

In Spells of Genesis there’s a large map players start on where they can pick a location to start an adventure. When they do, they get dropped into a small arena after they pick the deck they want to use. The cards of their deck spawn side by side each other on the bottom of the screen. In the arena, players fire spells from their cards at enemy icons that have spawned throughout the arena. These spells ricochet off of obstacles and the side walls of the arena. In order to complete the adventure the player must defeat all of the waves of enemies. After destroying a wave of enemies the player advances forward into a new arena with new enemies and obstacles.

The developers, Everdreamsoft, require players to download an additional application alongside Spells of Genesis called Book of Orbs. They created this as a digital bookkeeping notebook in order for players to keep better track of their cards and the BitCrystals they collect as they play. 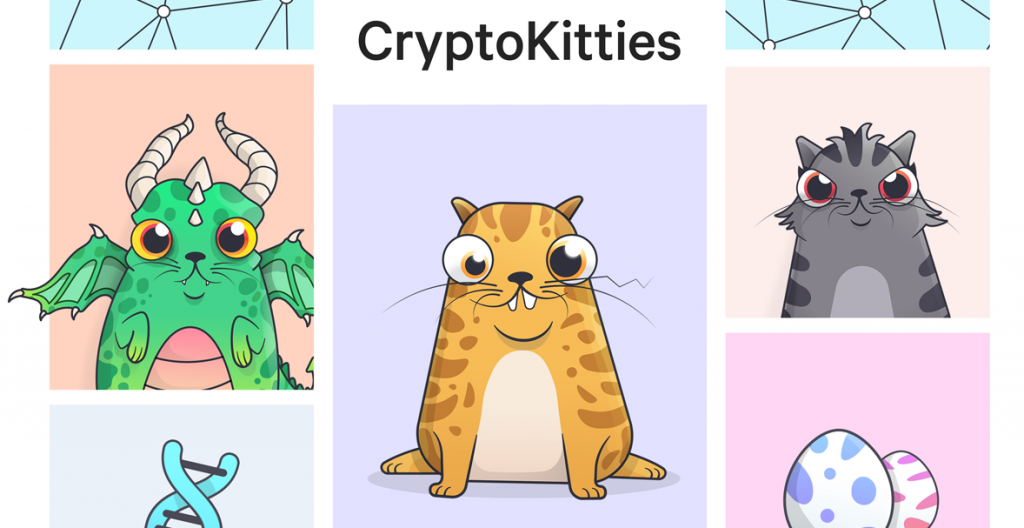 Fighting not for you? Then the Ethereum-based crypto collectible game Cryptokitties may suit you better. In this game players attempt to breed unique, one-of-a-kind digital cats all the while not having to deal with any of the furballs or having hair get all over their clothing that come with a traditional pet. It takes two different cats to create a new cat and players have to purchase these cats from the game’s marketplace using Ether. While players all receive one cat when they first join, it requires two to breed!

Players can reach out to others on the game to request to breed one of their cats for a set amount of ether. If the transaction is accepted, then a new one is created and the person who paid for the transaction receives a new cat. The game does not label the cats male or female, meaning any cat can sire another or be labeled the ‘mother’. However, if a cat was already labeled to expect a cat, then it already defined as the mother. This goes away when new cat is produced allowing it to freely sire with others.

All of the cats possess unique attributes randomly generated based on the previous cats they were bred from. Due to this game not having any combat, players must solely rely on the cat’s value in the marketplace. This value changes based on the supply and demand on the cat. There’s no definite formula to represent this value. Everything is decided on what other players want and how many similar cats reside on the game’s market.

The developers of the game do require all players to have an account with MetaMask in order to play.

Looking for something a little more complicated outside of using pure numbers in a game? Beyond the Void was created for players interested in a Multiplayer Online Battle Arena (MOBA) strategy, science-fiction game that runs on the Ethereum blockchain. Due to Beyond the Void working similarly to a MOBA, the gameplay was designed to feel much more complicated than your average collecting and trading blockchain video game.

Players take control of a mothership and work alongside various minion ships to attempt to conquer the enemy’s mother planet while protecting their own. The motherships vary in type, such as a defensive type, heavy firepower, or fast and agile. Each choice of ship comes with its own ability and passive. When two players connect to fight, they each choose an one ability in three categories: movement, offense, and utility. Players use their abilities in combat to give them an edge on their opponent.

During the game, players set up a ring around their mother planet to produce resources. Players can choose to create one of three rings: industrial, military, or engineering. Each of the rings specialize in a particular aspect of the game. Unlike traditional MOBAs, Beyond the Void only features a single lane with towers on it. A player must destroy all of the towers on their enemy’s side to reach their opponent’s mother planet. The player’s mother ship can travel outside of the lane to capture neutral planets and attack neutral camps to gain additional resources.

The developers of the game require all players to have an account set up on Mist, Ethereum’s official wallet. While other blockchain-based games rely on browsers, Beyond the Void requires players to create an account on Steam and download the client to play the game.

The reason some game developers may have not started using this technology in their games may factor in to these teams creating the game around a cryptocurrency. They could not want their players to feel forced to get involved in a cryptocurrency if they only wanted to play a game.

One solution to this bump in the road was developed by website community company Enjin who created the cryptocurrency ENJ, which officially launched on November 1, 2017. They want to get the gaming industry interested in the concept of cryptocurrency so players have a secure network too purchase digital goods and have direct ownership of the virtual items they possess. Additionally, players can theoretically use ENJ across multiple games and communities of their choosing without having to worry about investing in new cryptocurrency.

For now, ENJ still needs to gain authority in the market and as other blockchain-based games doe well, more game developers will start to see the benefit of introducing this technology to their players. Time will tell how players will react to this change and they’ll also find out the importance of their once fleeting digital items.

Shping is Looking to Change the World of Shopper Marketing Forever