A particularly popular alternative cryptocurrency that doesn’t use a blockchain platform is called IOTA.

What does IOTA operate on? The developers behind the project call it the Tangle. Traditionally, what a blockchain does is act as a shared public ledger. This ledger duplicates itself all over the place so every user apart of the blockchain can see it and how it works. They’re all connected. Whenever a user makes a transaction with a cryptocurrency, their transaction goes through the blockchain and gets processed. Because no particular party can tamper with a transaction on the blockchain, they remain private and anonymous. When a transaction happens, it happens.

Things work a little differently on the Tangle. When you make a transaction through IOTA’s Tangle, you have to confirm the legitimacy of two other transactions that need processing. This requires a more computation from your side than you would expect from a blockchain, but it doesn’t take too much time. Your computer is checking to see if the two transaction’s keys and balances are valid for them to work, and if they do, they go though. 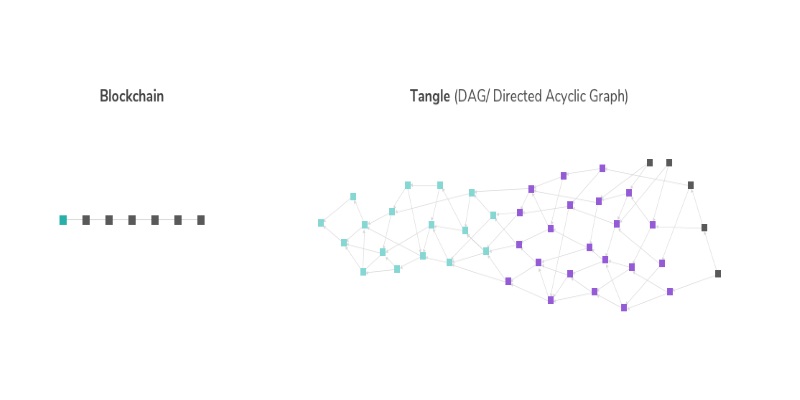 The reason the developers believed this method worked better was because the more people who use Tangle, the faster all of the transactions can go through. This works differently than a blockchain. For example, the more people that use Bitcoin, the longer a single transaction takes because there’s more people waiting in line. Bitcoin can only process so many transactions every ten minutes. So if you send money to a friend, it may take longer and cost more. Whereas IOTA’s Tangle comes with relatively low costs and quick transaction speed.

Another reason the developers moved forward with this concept was to protect against any potential spam or sybil attacks. Anyone attempting to initiate a spam attack against an organization doesn’t want any computing processing done on their end. Which is what everyone must do if they want to preform a transaction with IOTA. This deters any potential hackers from making any attempts at their platform, because they can’t preform enough transactions at a single time to make it happen.

Now that you’ve learned a little bit about IOTA, how do you feel about investing in it? The program behind the cryptocurrency may work differently than others, but it certainly promises the same protections everyone else uses, albeit with a different name and programming algorithm. For anyone interested in getting involved with IOTA, your next step is to figure out what wallet you should download and setup before you get started. This article will have a list of various options for you to choose from and list the unique features associated with each one!

Unfortunately, you’re not going to find a lot of IOTA wallets on the marketplace. Because the cryptocurrency works differently than the others, it can’t operate on similar wallets. It needs one to function with the algorithm the entire cryptocurrency runs from. This greatly limits your overall choices. Despite this, a number of the developers have gotten involved in these projects in order to ensure their users have choices available to them. Some of these wallets originally started out as community projects and transformed into something greater.

This is the official wallet for IOTA, the IOTA GUI and it’s a desktop wallet. Despite IOTA GUI being the official wallet, you may want to look at the alternatives available to you. You’ll find this wallet difficult to navigate due to poor optimization of the user interface. This wallet would best serve those who have a background in coding and feel comfortable operating in a complicated menu.

In order to get the most from this wallet, many IOTA users run their wallet as a full node. What does that mean? It’s eliminating the third party processes of desktop wallet when it access the IOTA network. This means you’re essentially opening your computer to run transactions straight to the IOTA server, rather than contacting the server for small transactions. Anyone opening up their computer to becoming a full node for IOTA will likely make large and several transactions. While there’s no financial incentive to do this, it does help other IOTA users and improves the system as a whole.

Each IOTA node requires neighbors to operate on the system, which you find on IOTA’s slack channel and follow this guide here on how they work. It takes quite a bit of effort to set up your own full IOTA node. But you can follow this guide here if you’re interested in a step-by-step process on how to do it. The developers recommend you only have seven to nine neighbors connected. When you have more than this number, it causes problems for the network.

Again, you can solely use this wallet as a light-weight wallet and only use it to access your IOTA funds. You can download this wallet to your desktop from IOTA’s github web page. 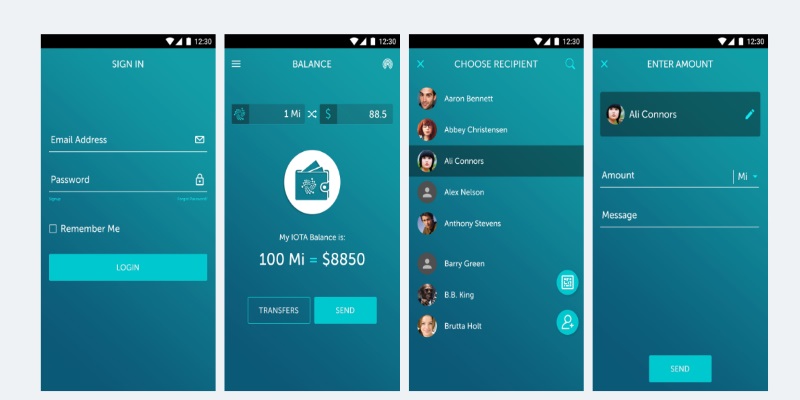 Nelium works great if all you’re after is a simple transaction system to send and receive IOTA tokens. This wallet application allows you to view your invested IOTA tokens, accept transactions, and send them from your smartphone. The developers behind the project do all the heavy-lifting for you, processing the transaction and then having it go through the Tangle. Because they’re doing the harder stuff, you’re free to send as much as you like to as many people as you want. The developers created this application using the base form of the IOTA GUI, and applied a few tweaks to allow it to function from a smartphone.

You can download this application to your smartphone from the Google Play store or Apple store.

This wallet started out as a IOTA community project. However, the developers took an interest in the program and got involved to ensure the it turned into a high quality product. Unlike the IOTA GUI, this wallet features a much cleaner user interface than any other IOTA wallet. You can see all of your funds on the front page, see how the health of IOTA over a set period, how much you’ve spent, how much you’ve purchased; there’s a lot going on. This wallet works from your smartphone, meaning you can make quick transactions wherever you are. As of right now, Trinity is available for anyone to use.

As a result of the wallet still being in Beta, the developers have a roadmap you can follow on their website. You can the wallet from this page, too.

Because of the unique platform behind IOTA, you won’t find too many wallets available for this cryptocurrency. Despite this, you have plenty to choose from.