However with massive growth and usage can come some growing pains. For blockchain technology, these growing pains come in the form of scaling issues and interoperability issues. The scaling issues revolve around how slow the transaction times are on popular blockchains and coins like Bitcoin and Ethereum and the interoperability problems stem from each blockchain being unable to connect or share with one another. These are major problems that could potentially hold back the reach or success of blockchain technology going forward.

So what are the possible solutions for these scalability and interoperability issues? Well, there are a number of proposed fixes, and everyone has their favorite. One possible solution is in the form of Cosmos Blockchain, a decentralized network of blockchains that hopes to solve these issues and bring us to the net level of blockchain? 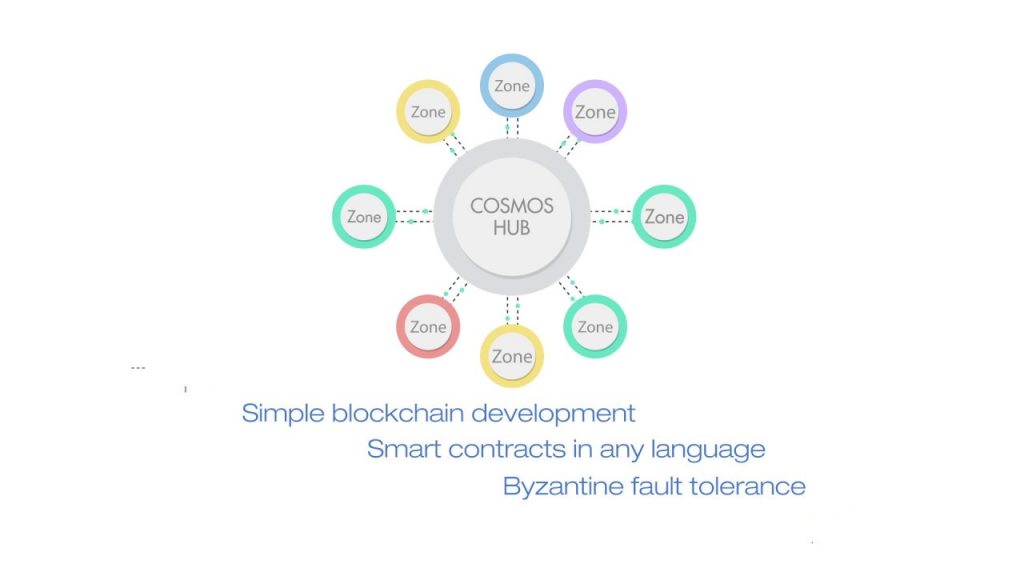 As mentioned, Cosmos is a decentralized network of independent (yet parallel) blockchains, with each powered by consensus algorithms. They hope to solve the long-standing issues of scaling and interoperability in the cryptocurrency and blockchain technologies industry. The ultimate goal of Cosmos is to allow many different types of blockchains to scale and communicate with one another, essentially creating the internet of blockchains.

How Does Cosmos Work?

Cosmos works in part thanks to its architecture, which consists of several independent blockchains (which they call “zones”) all attached to a central blockchain called a “hub”. Each of the zones are powered by consensus protocols. The hub is a distributed ledger and the first blockchain in the Cosmos network.

The hub connects to all the zones through the IBC(inter-blockchain communication) protocol and keeps a running record and total number of tokens in each of the zones. The hub can connect any and all zones (whether they are public or private) as long as they speak IBC.

As you can imagine, because the hub works with each of the zones and plays such a huge role in the Cosmos blockchain, security is incredibly important. It is secured by a group of validators, which can prevent it from falling victim to an attack or data breach.

Validators also play an important role in the ecosystem of the blockchain. They are in charge of committing new blocks and ensuring that a consensus is reached throughout the ecosystem. The network is also completely permission-less, so anybody can build a blockchain on it for anything.

The native token or currency within Consensus is called Atom. The token is designed to be a utility token that will be purely used for staking on the blockchain. Think of the Atoms as virtual miners, and those who hold Atoms will use them to gain access to the blockchain and pay the necessary fees, and also as spam-protection.

Because the Cosmos blockchain has not launched yet, you are not able to purchase Atoms on any exchange yet. When they launch, 5% of the Atoms go to its initial donors, 10% go to the Interchain Foundation, 10% go to the company developing most of the software, and the remaining 75% to be distributed according to the results of the private and public fundraisers.

The Features and Benefits of Cosmos

So what are the benefits and features of Cosmos and why use it over other, similar, offerings? Well, there are a few different reasons:

Cosmos can operate with multiple other applications and cryptocurrencies, which is pretty rare for a blockchain ecosystem to be able to do well. When you create a zone, you are essentially plugging any blockchain system into the hub and are able to pass tokens between the zones, without the need for a middleman.

While payment networks like Vis and Mastercard can support a ton of transactions, most blockchains (including Ethereum and Bitcoin) can only support a few. This problem will keep blockchain and crypto from ever truly becoming mainstream, unless a solution is found. Cosmos, on the other hand, can handle thousands of transactions a second. Even if a certain zone is starting to slow because of so many transactions, another identical zone can be created and added to the hub with ease.

It is Developer Friendly

Cosmos was designed with developers in mind. It allows you to easily build decentralized applications and comes with a powerful toolkit. Whatever sorts of application you want to create, Cosmos will be able to support it.

The Team Behind Cosmos

Cosmos is supported by the Interchain Foundation (ICF), and the team at Tendermint (a consensus protocol) has been contracted by the ICF to head up development for Cosmos. The CEO and founder of Tendermint is Jae Kwon. Before founding Tendermint, Kwon was a software developer in Silicon Valley for a number of big companies. In addition to that, he also worked on many open source projects throughout his career. The CTO and co-founder at Tendermint is Ethan Buchman, who has been a software engineer and research for years.

The rest of the team at Tendermint is made up of several individuals with a lot of experience in a number of different niches including design, communications, engineering, software, research and more. Those involved in the Interchain Foundation such as board members and advisors are also a part of Cosmos.

In conclusion, Cosmos could be the answer to some of the biggest problems facing blockchain technology and cryptocurrency today. While it is still in its infancy and has a lot of growing to do, it is an exciting development and solution.