Borne from the crisis that still haunts Ethereum to this day Ethereum Classic was one of the first high profile “hard forks”. It uses the same code base as Ethereum but there are some key differences

Occasionally cryptocurrencies undergo what is known as a hardfork. The popular Ethereum cryptocurrency was a result of one of these hard forks. This event was the result of a tumultuous period in Ethereum’s history and left behind a relic of Ethereum’s past, Ethereum Classic.

The history behind the Ethereum Classic and Ethereum hard fork is a mixture of technical and philosophical problems that resulted in a fairly acrimonious break.

The whole Ethereum ecosystem is built around the idea of smart contracts. These are essentially automated contracts that enforce a pre-programmed set of rules. They form the basis of the majority of new ICOs created for the ERC20 platform.

In order to manage this feature the Decentralized Autonomous organization (DAO) was created. This was an incredibly complex smart contract that was designed to revolutionize the way Ethereum worked.  A DAO is designed to work in the same sort of way as an ordinary company, except rather than executives making the decisions all of the rules and decisions are hard coded into the smart contract.

The DAO gave a way for users to have a say in how Dapps (Decentralized apps) were developed. If a user wanted to be part of the DAO system they’d have to buy DAO tokens which showed that they were part of the network. A group of known figureheads, or curators, would select projects and then DAO holders would be able to vote on whether this project should be allowed into the Dapps chain. If a proposal got 20% support then it was given the funds it needed to get started.

The concept proved wildly popular and within 28 days the DAO ICO had raised $150 million in Ether. Unfortunately there was a glaring flaw within the DAO smart contract. If for some reason a user decided that they were unhappy with the DAO they had the option of cashing out by “splitting” their funds into a child DAO. They could then either create their own platform for vetting new Dapps or wait the specified 28 days to access their funds.

The idea was sound in principle but there was a major problem with the code behind the smart contract. If a user wanted to exit the DAO then they would have to send a request and the split function would follow two steps:

A hacker realized that there was a major security hole in this process. It was technically possible to create a child DAO that would force the split function to send funds without first updating the internal token balance, like so:

This flaw is called race-to-empty and allowed the hacker to drain around $50 million in Ether and store it in his child DAO. This hack was in no way the fault of the Ethereum devs however it send shockwaves through the cryptocurrency community and the Ethereum team felt compelled to take action.

Why did Ethereum opt for a hard fork?

Initially the dev team wanted to use a “soft fork” that would allow users to choose whether to update. A soft fork lets users continue to use the old version of the blockchain without receiving the benefits of any future updates, similar to the way that legacy support for some software works. The soft fork, nicknamed the DAO wars, would cause miners to automatically reject any transactions containing the script used in the DAO hack. The problem was that this opened up the entire network to a DOS (denial of service) attack.

Because miners will simply reject any malicious blocks it was possible for an attacker to spam the network with transactions containing the DAO script. This would crowd out the network; preventing miners from being paid and stopping legitimate transactions from taking place. This wouldn’t impact the network’s security but it could render it too slow to be of any use and could cripple the Ethereum network.

The risk posed by a DOS action forced Ethereum’s developers to take radical action, utilizing a hard fork update.  The main purpose of this hard fork was to refund the money taken from everyone by the DAO via a smart contract with the sole function “withdraw”.  Unlike a soft fork hard forks will remove all backwards compatibility and will often end with two blockchains running concurrently. Generally the original chain will die as new users move on to the new, this was not the case with Ethereum. 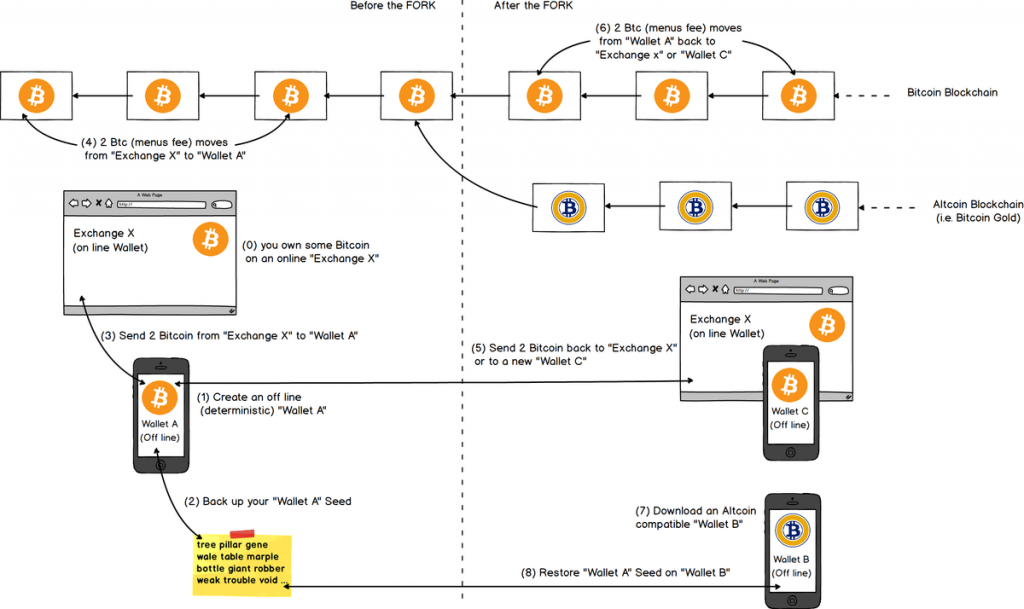 The Ethereum classic hard fork worked in the same way as the more recent Bitcoin Cash hard forkMany users were angry at the proposal and believed that the decision to hard fork Ethereum undermined the immutability of the blockchain. The fear was that if the Ethereum developers had decided to take this action now,  what was to stop them making another hard fork. There was also an ideological argument against “bailing out” the DAO ICO for a mistake not made by the Ethereum community at large.

All this meant that for many ETC sympathizers the hard fork represented an easy way out that undermined the whole concept of Ethereum. It proved that the blockchain can be altered by human whims and is little better than the traditional financial institutions it was supposed to supplant. ETC proponents argued that code should be law and that the blockchain should not be altered because of the mistake of a single ICO. This argument resonated with some crypto-idealists and some important figures like Barry Silbert, the CEO of Grayscale, have thrown their support behind Ethereum Classic.

At $0.50, risk/return felt right. And I'm philosophically on board

The motivations behind the Ethereum classic team are largely ideological. They believe in the tenant that “code is law” and support the original interpretation of Ethereum as a world computer that can’t be shut down. ETC supporters argue that the DAO hard fork amounted to a bailout and went against the spirit of cryptocurrency. The ETC team largely follows the ideals set out in the Crypto-Decentralist manifesto.

Ethereum or Ethereum Classic, which is the better investment?

It is easy to classify Ethereum and Ethereum classic as in direct competition but at this point Ethereum has changed so much that it is not entirely accurate. Ethereum acts as a fully fledged smart platform and has become the 2nd most popular cryptocurrency by a long while. Ethereum Classic meanwhile has languished in relative obscurity.

This is largely because the vast majority of the community followed Ethereum founder Vitalik Buterin towards ETH and the Ethereum Classic community was not only drained of talent but left far smaller than its Ethereum counterpart. Ethereum has been be able to develop a far ranging platform that has been widely adopted, Ethereum Classic has not.

Technologically there is not that much setting Ethereum and Ethereum Classic apart. They are both capable of using Dapps and are both still based on Ethereum’s original code. The difference is that ETH has significantly developed their project over the last couple of years and have gained a lot of support outside of the cryptocurrency world in the form of the Enterprise Ethereum Alliance.

Ethereum has seen solid growth over the last two years and still seems to be generally bullish. Another important factor in Ethereum’s growth is the ERC20 platform. $5.6 billion was raised by ICOs in 2017 and the vast majority of these new tokens were powered using Ethereum’s powerful ERC20 platform. Ethereum is designed to act as a platform for smart contracts and this is the primary driver of its value for the moment.

Despite the popularity of the ERC20 platform Ethereum has some major problems on its horizon. A study found that smart contract vulnerabilities put around $4.4 million of Ether at risk of being easily hacked. The Ethereum network is still dogged by the legacy of the DAO debacle and another major hack could be enough to undermine the good faith they’ve built up in the cryptocurrency community. Ethereum has also been the victim of severe slowdowns over the last few months and there are questions surrounding the platforms ability to cope with large volumes of transactions.

In contrast Ethereum Classic has seen more limited development and has been unable to gain mainstream traction outside of crypto-idealists and purists. The cryptocurrency has largely been written off as an orphaned chain and some such as David Seaman have even gone so far as to claim that the name would be considered an SEC violation in ordinary markets. Despite these concerns ETC has seen some significant rises, although it has always struggled to hold after a rally.

In the near future ETC has an excellent opportunity to see a bullish market rise thanks to the upcoming launch of the Callisto Network. The Callisto network is an Ethereum Classic clone that will hard-fork to create a new blockchain. This is being done because the Callisto developers are concerned about the potential security issues surrounding ETC smart contracts.

The main aim of Callisto is to develop a self-sustaining, self governed, self funded blockchain ecosystem and development environment. The project will also introduce a cold-staking system that will reward users, similarly to NEO and neoGAS.  This is important for ETC because every holder of a Ethereum Classic Token will receive a Callisto token at a 1:1 rate. If users are interested in receiving tokens from the Callisto “air-drop” they will buy ETC. This has already led to a slight increase in the price of ETC and if investors decide to hold at $40.00 then the launch of Callisto could mark a breakthrough moment for ETC.

Despite this potential growth ETC is not necessarily a better investment than its more successful cousin ETH. Yes, there is a lower barrier to entry and plenty of room for growth but traditionally ETC has been unable to make good on their gains. Ethereum on the other hand has experienced substantial growth year and on year and barring any major failure of their ICO platform we would expect this to continue. That being said transaction times could post a problem for the Ethereum network but it is hard to see how ETC can capitalize on this.

If you believe in the ideology behind the platform then ETC can be a good choice but for most investors ETH will probably be the safer long term bet.

This does not constitute investment advice, always do your own research before buying