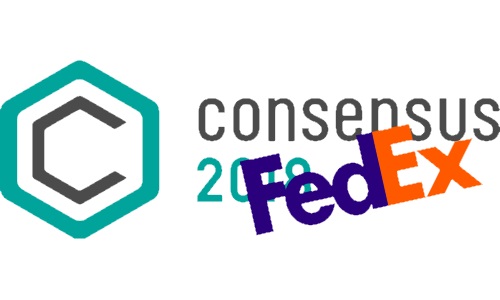 At Consensus 2018, Don Tapscott sat down with FedEx executives to talk blockchain technologies in a fireside chat. Mr. Tapscott is the Executive Chairman and Founder of the Blockchain Research Institute. He was joined by FedEx chairman and CEO Frederick W. Smith and FedEx Executive Vice President, Information Services & Chief Information Officer (CIO) Robert B. Carter.

Tapscott opened with his own speech on the status of the blockchain economy. He talked about how we started out with an internet of information but now we are in something different. The second era of the internet: an internet of value. Where anything with value can be digitized and transacted without a middle man. He also predicted a Cryptocurrency powered US dollar put out by the Fed.

But onto his talk with the FedEx executives and what we can learn from that.

Judging by this Fireside chat, FedEx is very bullish on blockchain technologies and their ability to innovate in the supply chain industry. A huge part of FedEx’s business is tracking not only individual packages, but pallets and freight containers that often go overseas. This is the first area that Smith and Carter foresee blockchain technologies having a major impact.

According to Smith, one of the biggest problems facing companies like FedEx today is cross border shipments. The packages must be inspected multiple times, there is an issue with different locales having different terminologies. There is a lot of friction associated with shipping something to another country. Blockchain technologies, according to Smith, could eliminate a lot of that friction.

“Trust is an essential legal requirement. If you ship something that is listed as semiconductors but it’s actually Fentanyl, that’s a real problem. Blockchain has the ability to make that information available to everyone, rather than information from one source. Blockchain has the potential to completely revolutionize trade across borders.”

FedEx was a big innovator in supply chain technologies. First by utilizing personal computers and later, the Internet, they were one of the main movers in getting the shipping industry from a pay and prey system to one where you could watch your package each step of the way. Smith thinks that blockchain technology could be that system “on steroids.”

“We think this is potentially profound technological change. The history of business has always had middlemen connecting buyers and sellers. Technology has been flattening the world and connecting true buyers and sellers [by removing the middleman]. It will be a very interesting next few years. We are quite confident that it will have a huge impact on supply chain tracking.”

While Carter contends that improvements to scaling technologies will be essential for blockchain tracking to have an impact on consumer shipping, he thinks they are capable of greatly improving the freight and pallet shipping industries as the technology currently stands. And that improvement will come in a short amount of time.

“The Freight industry is a great place to start. We move more than 12 million shipments a day. For everyone 10 million [Freight] shipments there are 100 million transactions [or individual shipments]. We believe the technology will scale but right now it has use in the freight industry. That is where we will start. [Frederick Smith] and I both think this is a real application coming in a short period of time, not a long period of time.” 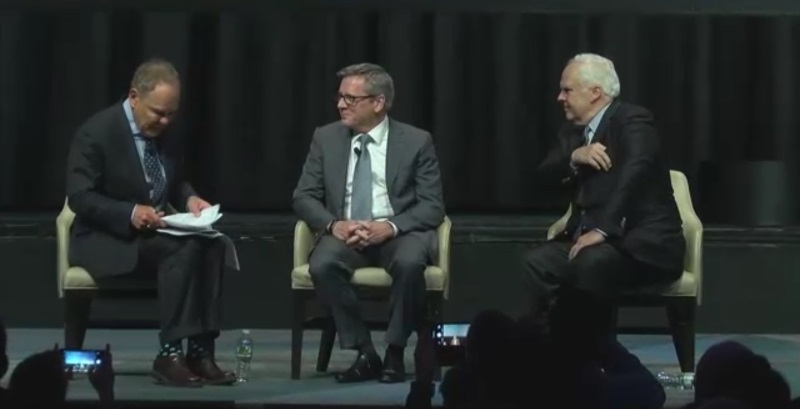 Part of the future they envision includes expanding FedEx’s supply chain tracking to include everyone from custom agents, consumers, and even other carriers. When asked by Tapscott if they could foresee themselves working with their competitors, the answer was a resounding yes.

“We can envision a day where we cooperate with our competitors. The world has become a sharing information economy.” Explained Scott, “With the blockchain, it will drive full accountability. There are all kinds of processes that need to be shared among carriers, authorities and customers.”

Smith has been interested in Bitcoin and Blockchain technologies for longer than one might expect. While Carter is the CIO of FedEx, it was actually Smith who tasked him with understanding the blockchain world. Smith personally thanked Tapscott for helping him get up to speed with the blockchain industry.

FedEx was first linked to Blockchain technologies back in December 2017, when they announced that they were starting a blockchain pilot program. Today’s fireside chat could be viewed as an update to their progress and the shipping giant’s first impressions.

Those first impressions seem to be very positive. As innovation and advancement seem to be at the forefront of their mind. They are confident that Blockchain technologies will play a large role in the supply chain industry and are adamant that FedEx will not fall behind.

FedEx has been around since 1971, long enough to survive the birth of personal computers, the internet and ecommerce. It has not only survived all that, but thrived, becoming the 10th largest private employer in the United States. Scott believes it must stay in front of technological advances if it wants to continue to grow.

“If you are not operating at the edge of technology you will be disrupted” summarized Scott.

You can watch the Consensus 2018 livestream on CoinDesk.