Coming every Sunday, the Hodler’s Digest will help you track every single important news story that happened this week. The best (and worst) quotes, adoption and regulation highlights, leading coins, predictions, and much more — a week on Cointelegraph in one link.

True to form, Bitcoin (BTC) took markets and the media by surprise when prices leapt by more than 20% in 24 hours. Prices against the dollar had dwindled as low as $9,688 earlier in the week — but by Wednesday, they surged back to highs of $11,525, hitting $12,025 on Thursday. Momentum had waned by Friday, with the market testing support for $11,000. The bounce-back left naysayers red-faced, and just a few hours before BTC returned to green territory, Forbes had claimed the “Bitcoin bubble” had burst. Crypto trader Josh Rager said the recovery makes Bitcoin’s prices look “extremely bullish.” But with BTC continuing to enjoy market dominance of more than 60%, there are worries that Ether and altcoins could suffer.

Facebook is continuing to face resistance as it tries to press ahead with its Libra cryptocurrency. On Tuesday, lawmakers from the United States House of Representatives Committee on Financial Services urged the social network to stop development of the stablecoin immediately. It warned the project could lead to an “entirely new global financial system that is based out of Switzerland and intended to rival U.S. monetary policy” — and even claimed it could have ramifications for national security, privacy and the world’s economic stability. The letter written to Facebook executives said the moratorium could be used to explore legislative solutions and hold public hearings on the risks and benefits of Libra. 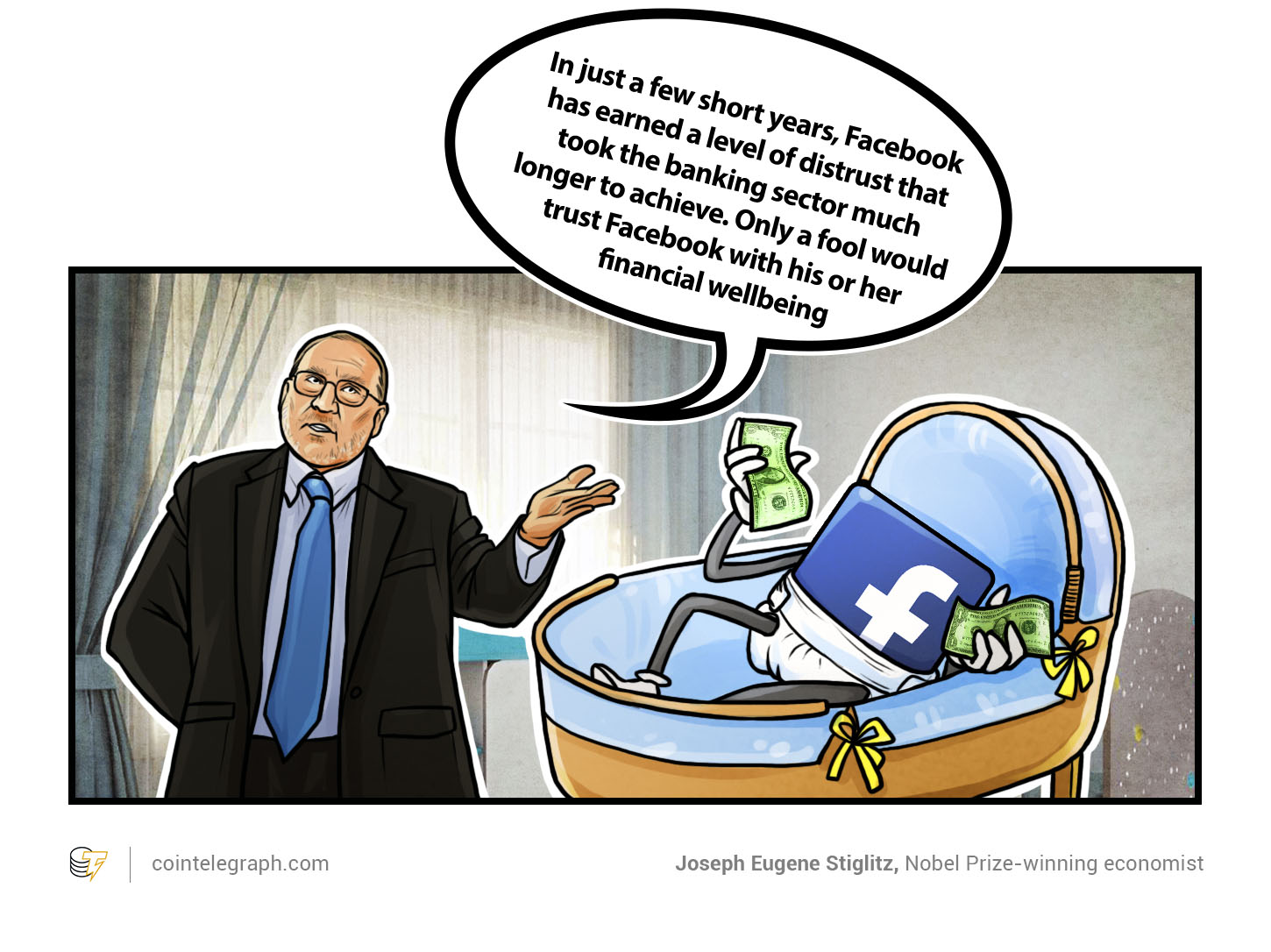 Havana is considering whether to start using cryptocurrency in order to dodge the long-running trade embargo imposed by the U.S. The cocktail of sanctions on tourism and foreign investment, when combined with lower exports and a decline in aid from Venezuela, has pushed Cuba’s state-run economy deeper into crisis. Reuters reports that the plans, announced on television by President Miguel Diaz-Canel, could raise income for a quarter of the population — bringing monthly wages up from $25 a month to the equivalent of $44.50. Venezuela launched Petro, its state-run cryptocurrency, last year, but its use has been limited so far.

What a difference a year makes. Last year, Augustin Carstens had described cryptocurrencies as a “bubble, a Ponzi scheme and an environmental disaster.” But now, the Bank of International Settlements (BIS) head has had a change of heart. In an interview with the Financial Times, he embarked on an extravagant U-turn — and said he actively endorses the creation and issuance of digital versions of national fiat currencies. Carstens went on to say that the BIS is supporting central banks that are pursuing this approach, and suggested a market for these digital currencies could emerge “sooner than we think.” 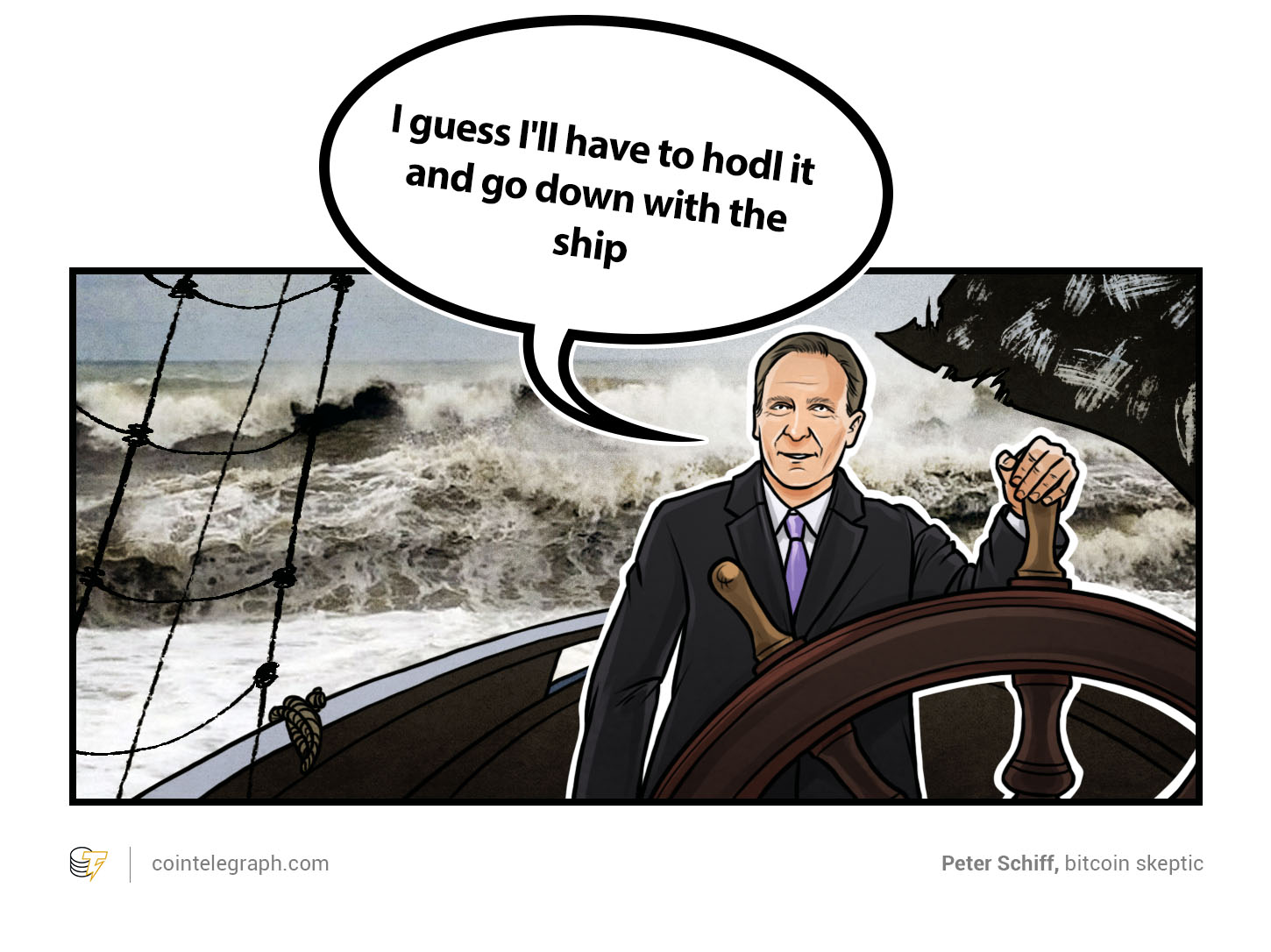 The Swiss food giant Nestlé is embarking on a trial that will see blockchain used to track its products along the supply chain. The company has teamed up with OpenSC for the venture. It’s hoped the program will enable consumers around the world to access facts and figures about Nestlé’s responsible sourcing efforts — and to begin with, it will trace milk from farms in New Zealand to the company’s factories and warehouses in the Middle East. 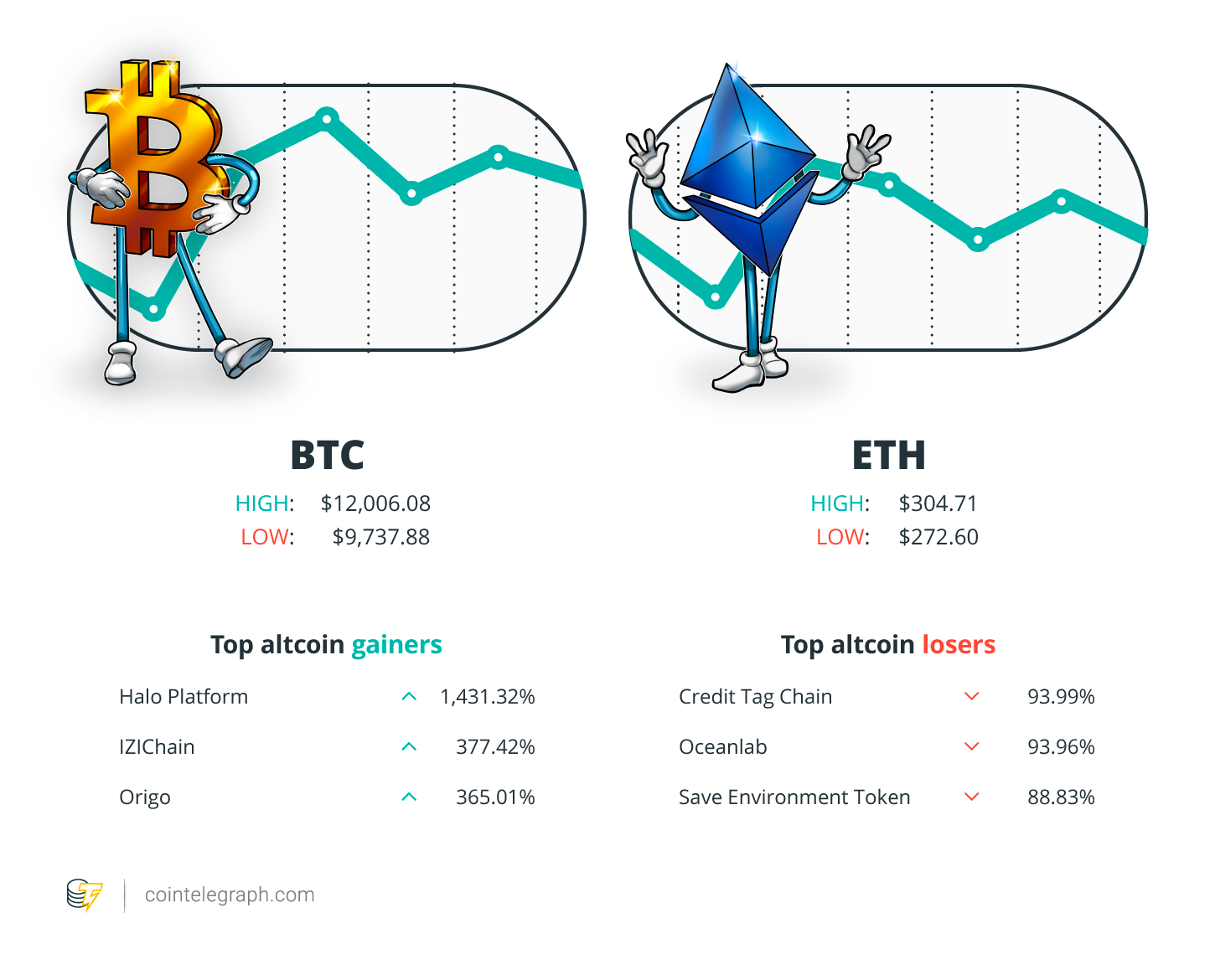 For more info on crypto prices, make sure to read Cointelegraph’s market analysis.

“I guess I’ll have to hodl it and go down with the ship.”

“Facebook will not control the network, the currency, or the reserve backing it. Facebook will only be one among over a hundred members of the Libra Association by launch. We will not have any special rights or privileges.”

“It is imperative that Facebook and its partners immediately cease implementation plans.”

The United States House of Representatives Committee on Financial Services

“Right now, there is a lack of mainstream cryptocurrency adoption because most people are intimidated by the process to acquire it. By using the millions of existing ATMs around the world, we can now bridge the gap. Bitcoin is new and unfamiliar to many, but ATMs are not.”

“In just a few short years, Facebook has earned a level of distrust that took the banking sector much longer to achieve. Only a fool would trust Facebook with his or her financial wellbeing.”

Prediction of the Week

This week’s prediction comes from Anthony “Pomp” Pompliano, the co-founder of crypto asset management firm Morgan Creek Digital Assets. He believes BTC has the potential to reach dizzying heights of $100,000 by the end of 2021. Pomp claims the halvening in May 2020 — when mining rewards are going to be reduced by half — will be one of the biggest drivers of continued price appreciation. With trading volumes reaching record highs, and BTC starting to be recognized as a safe haven asset amid a climate of global instability, Pomp’s view is that “time is bitcoin’s greatest advocate.” 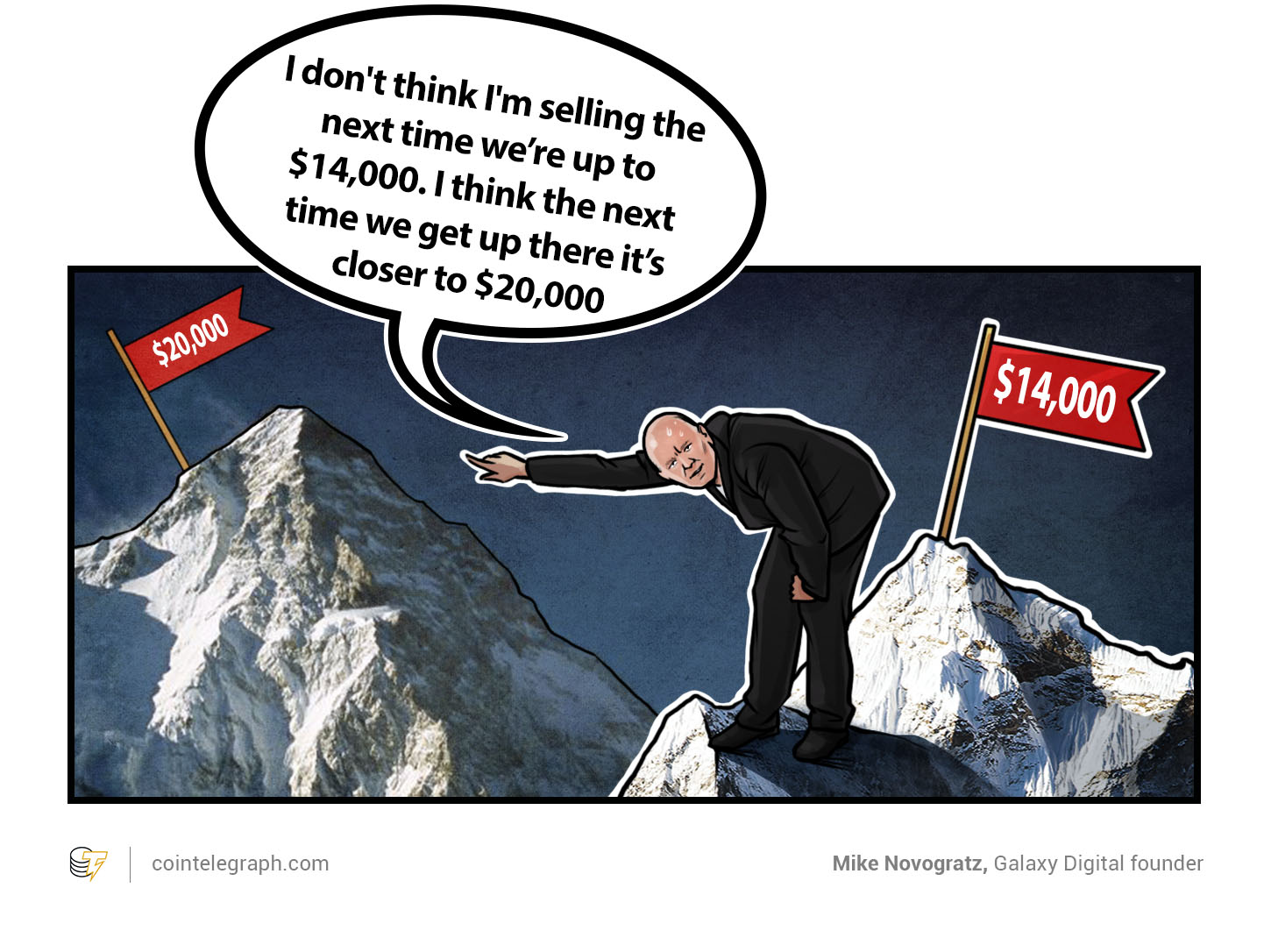 FUD of the Week

Monero discloses bug allowing XMR to be stolen from exchanges

The privacy-focused altcoin raised eyebrows this week when it disclosed a series of security vulnerabilities, and one of them could have left crypto platforms seriously out of pocket. The flaw would have enabled fraudsters to trick an exchange into thinking they had deposited a huge sum of XMR — and from there, they would have the freedom to convert it into other coins and make withdrawals.This vulnerability and seven others were flagged a few months ago, with Monero disclosing them in quick succession on Wednesday.

In an opinion piece for Cointelegraph, Stuart Popejoy argued that Hyperledger Fabric sacrifices the most important features of a true blockchain, and warned IBM’s system has misleading performance numbers and questionable long-term business viability.

“Not everyone is happy but we have to move on,” some challenges to the FATF’s new guidance

Regulators and exchanges from different countries met in Japan for the V-20 summit, which took place at the same time as the G-20 summit. At the top of the agenda was discussing how to implement the Financial Action Task Force’s latest guidance on how to prevent cryptocurrencies being used for money laundering. Here, Cointelegraph explores whether the “travel rule” will be good for the crypto industry as a whole.