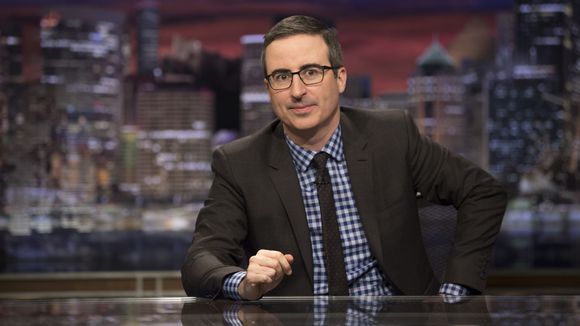 Whether you like his show or not John Oliver often comes up with some pretty salient points, well he’s right once again, EOS and other cryptocurrencies like it are no better than gambling. John Oliver’s show Last Week Tonight has been both amusing and infuriating audiences for years now. The British host is known for delving into poorly understood topics and trying to explain them. On March 11th he, as a number of other TV show hosts have done, attempted to explain Bitcoin.

He actually did a pretty good job and the segment explained the basics of Bitcoin, Blockchain and initial coin offerings. You can find the full video below. While most of his video isn’t news to those of us immersed in the cryptocurrency World there is one part that even old crypto hands need to pay particular attention to.

At one point he discusses EOS and comes to the conclusion that investing in many ICOs is essentially gambling. The embarrassing truth is that for many offerings on the market, he’s right. Investing in EOS and other projects like it is a gamble and to it’s not a great one at that.

Why Are ICOs Controversial?

It’s true that ICOs have bought some of the most innovative and disruptive cryptocurrencies to life. Some of the biggest names in the Cryptocurrency world, such as Ethereum, began their lives as simple ICO, looking for investor cash to make their project a reality. They are an important fundraising tool that has helped to democratize investment.

Unfortunetly ICOS have a darker side. As time has gone on the good ICOs are becoming outnumbered by the bad and a lack of effective regulation has allowed suspect projects to flourish in an environment largely driven by hype and word of mouth.

There’s clear jokes like Jesus Coin and Useless Ethereum token, which despite being obvious cases of satire still raised absurd amounts of money. There are also schemes like Bitconnect, mentioned by John Oliver, that were little more than Pyramid schemes. These projects can catch out inexperienced investors who haven’t done their due diligence but not all of the bad projects are easy to spot.

There have also been cases of outright scams such as Prodeum. This was a very professional looking project that sought to bring produce to the blockchain by providing companies with a way to track the origin of vegetables and fruit. The owner of the project disappeared shortly after its ICO along with all of the money that had been raised.

EOS is not any of the above. The project is ambitious, technically quite interesting and generally looks promising. The problem is that they entered into their ICO without a completed project. This has become increasingly common for ICOs but it should represent a real problem for investors.

EOS is a Promising Project Without a Product

Rather than being a blockchain in itself the EOS network is designed to be a platform that allows developers to tap into a fully functioning ecosystem. The end product will include features like user accounts, complete with different permission levels and a way to recover stolen or compromised account with a number of ways to restore access to a compromised account. The blockchain will also feature cloud storage and a semi-democratic consensus model designed to prevent hard forks.

In order to circumvent the transaction time problems that have plagued Bitcoin and Ethereum EOS is designed to work on a proof of stake consensus system. Specifically Delegated Proof of Stake (DPOS). Anybody who holds tokens on a blockchain using EOS.IO software (Note, this means tokens issued by developers using the EOS Dapps environment not holders of EOS) can select block producers through a continuous approval system. EOS developers believe that a DPOS system could allow blocks to be produce blocks every 3 seconds, keeping transaction times to a minimum. You can find out more about how this is supposed to work in their white paper here.

As promising and well thought out as their ideas are EOS went into its year long ICO without any working prototype, little to no code had been written and there is only 3 months of their ICO left and the team has only just begun to complete their early alpha.This alpha, dubbed Dawn 3.0, has created a testnet that allows developers to create apps for the EON network. This still came too late for my tastes and to make matters worse they have chosen a particularly complicated way to launch their ICO. (updated for clarity 16.03)

The EOS Token Doesn’t Actually do Anything

One of the biggest red flags in the whole EOS project is that their ERC20 powered EOS token doesn’t have any actual function on their blockchain. This is partially borne of necessity. Most projects are built upon the ERC20 blockchain and this means that the final token will have a specific purpose. EOS on the other hand is designed to be its own platform so the ERC20 token essentially just represents a fundraising tool.

To be fair to the project once the EOS ecosystem goes live users will be able to retrieve native tokens for the blockchain. The problem is that as things stand this process is very long-winded and requires users to provide their private wallet keys, which opens the entire contents of their wallets to potential hackers. On top of this it puts the emphasis upon the user to receive the their “reward” for investing in EOS, if they fail to correctly register they will not receive any of their native EOS tokens.

In other words, in order to gain the funds necessary to start their project EOS had to use somebody elses ecosystem as a fundraising tool because they don’t have any functioning ecosystem.

The developers did not write a single line of code before the ICO began and still haven’t released a completely functional alpha. Despite this they were still able raise $1.5 Billion dollars to date, with 3 months left until the ICO is completed. EOS’ parent company Block.one will keep 10% of all Ether contributed to the crowd sale.

The claims that the development team needed these kinds of funds to begin the project are slightly undercut by the fact that in many other ambitious projects, most notably Decred, rather than fund the coin through an ICO the developers initially funded the project from their own pockets. They were able to either purchase DCR at a rate of $0.49 per coin or exchange it for work performed at the same rate. It is also suspect to argue that a developer needs over $1.5 billion in funds in order to create what amounts to a platform for other companies to build a functioning product. Block.One are not developing any actual programs for EOS, just the platform itself.

To recap, EOS launched a crowdfunding campaign without any product, because of this they had to create a token with no practical use on another company’s platform that users will potentially be able to reclaim at some point in the future if the project is a success through a fairly arcane process. Despite this the EOS token is still holding steady at around $5 per token.

In any other environment this project would not have received the necessary funding. At the very least they would have needed to have a prototype in place before going to investors. The problem is that the fervor surrounding the search for the next Bitcoin has robbed the market of its reason. Projects are largely funded on the back of grandiose promise and hype, this allows them to build an army of evangelists that will HODL no matter how dire things become.

The simple fact is that any project that goes to funding without any kind of product is essentially a gamble. It does no matter how good their white paper is, how flashy and impressive their sales pitches or how experienced their teams. The value of ICOs lies in the product that supports them and any investment in an ICO without a product is a shot in the dark. There is every chance they will fail to create a product, their idea will prove unworkable or that they will simply run out of money and abandon the project before its complete.

The problems surrounding companies attempting to get funding prior to a products completion is in many ways beginning to overshadow the problems surrounding outright fraudulent projects. There have been multiple attempts to bring some level of quality control to ICOs. For example the smart contract platform NEO forces users to burn GAS in order to create a new token, forcing them to lay out at least $10,000 before beginning their project. ICO incubators, such a Global Blockchain Technologies, are also looking to support promising projects by helping them launch a successful ICO with an actual product.

Now it’s important to remember that this doesn’t mean that EOS and projects like it won’t succeed. They aren’t likely to, but there is still a chance that EOS could overtake Ethereum and I’ll have missed out on a huge opportunity. The thing to remember is that investing in anything, especially cryptocurrency, is as much about risk management as it is about picking the right product. Yes, you could take a gamble and invest in EON in the hopes that the project will pay off, but you are far more likely to see a return on your investment by looking at projects like VeChain, RedPulse and Narrative. Even projects with a limited proof of concept prototype are more likely to make it to production than one without.

Nothing is stopping you from investing in EOS but remember that it’s a gamble and if it all goes wrong you will have nobody but yourself to blame.