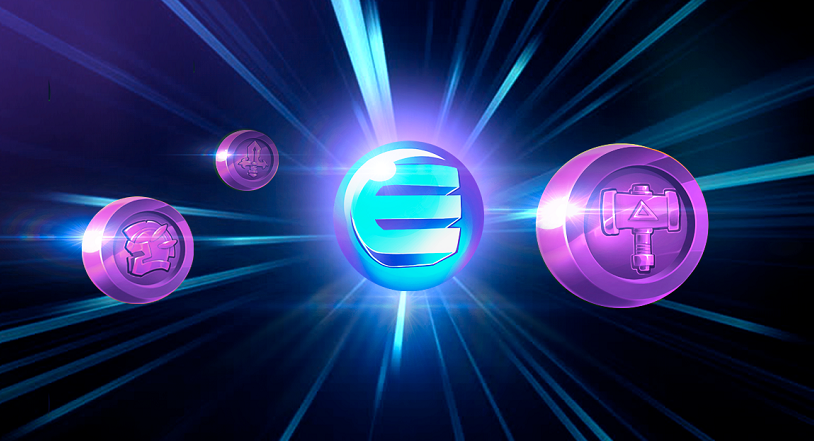 Enjin coin hopes to offer a solution to the high fees and account hacks that have plagued gamers for years, but is it up to the mark?

If you have done any gaming in your life then either you, or someone you know, has had their account compromised and lost everything. These losses can be devastating and represent hundreds of hours of lost time and thousands of dollars in in game purchases or subscriptions fees. Enjin are hoping that they can use the blockchain to provide a solution and prevent this from happening again.

Enjin coin is designed to provide a better alternative to the lucrative “digital goods market” by ensuring that all purchases are stored on the blockchain, rather than company servers. They also want to build up a network of games to facilitate easier trade.

What does Enjin coin do?

If the concept of Enjin coin sounds familiar that is because it is. One of the most well known examples of a “virtual marketplace” powered by fiat currency has been around since 2003. The cult classic EVE online has a long tradition of in game currency being converted into fiat and the biggest battle in the game is estimated to have cost $300,000–$330,000, yes that’s dollars. Another classic example of this kind of virtual marketplace is the Steam marketplace, where users are able to trade and share steam trading cards and in game items for money.

The problem with both EVE online and the steam marketplace is that they are centralized. If your account is compromised on either platform then you will lose all of your in-game items and therefore all of the money you put into them. To make matters worse anything you “own” in game will be lost if the company running the servers goes bust. Steam is under no obligation to honor its commitments should the company go under and therein lies your problem. So long as your items are on another company’s servers they are not your items.

This is where Enjin Coin offers a novel solution. By putting the items onto the blockchain they exist forever and have an inherent underlying value, namely the Enjin coin. Users are then able to trade these items across any other game that is part of the Enjin platform. Unlike its centralized competitors, if Enjin go bust then the items will theoretically continue to exist because they will be stored on the blockchain and not on servers that require maintenance fees. The idea is promising but how does Enjin Coin work?

How does Enjin coin work?

Enjin coin is designed to be integrated into a game by a developer. The first step any developer needs to take is to acquire some Enjin coin. They have two ways of doing this. The first is to enter into a partnership with Enjin who have around 100 million tokens reserved for strategic partnerships. The other is to acquire Enjin coin via an exchange. Once the 100 million tokens have ran out this will be the only way a developer can acquire new coins.

Once the developer has some ENJ coins they are then able to “mint” them into ingame items using the provided SDKs. Developers can “Mint” any in game object or even the game itself. Every minted asset will have a real life value and it is possible for developers to create “bundles” of assets that share the same ID. The developers are able to pick from six different supply models:

After the developers create their items there will be a few different ways that players can acquire them. They could acquire them in-game, either as some kind of referral process or was a reward for a quest, it could even be part of a tokenized crafting system. They will also be able to purchase them, either from an ingame store or peer-to-peer via in game marketplaces.

When the players get hold of their items they will be placed into a secure Enjin wallet that can be used to trade the item with other players or via a third party marketplace. The efinity trading process will include the ability to place multiple cryptocurrencies in an escrow account and should eliminate most forms of fraud.

Players will also have the option to “melt” their items back into Enjin coins. This is considered a worst case scenario as players will not receive the full “backed” value of their item and a portion will go to the developers. This is designed to act as a sort of insurance to encourage players to buy games they can’t normally get.

How does the Enjin wallet work?

The lynchpin of the entire Enjin system is their groundbreaking wallet. Enjin tout it as the “most secure wallet in the World” and it is designed to provide users with a simple to understand multi-currency wallet that doesn’t compromise on security. The whole wallet is specifically designed to run on non-rooted mobile devices which makes it highly user friendly.

Rather than storing your keys in-app the Enjin wallet acts sort of like a UI for a paper wallet. The app itself does not store any of your funds and has no access to your private keys. Users are also able to restore their funds on any device by using a 12 letter passkey, or paper wallet.

The Enjin wallet also takes advantage of some pretty unique security features. To prevent any keyboard snooping the wallet takes advantage of its own inbuilt propriety keyboard. The keyboard has three inbuilt security options and the ability to randomize keys to provide better input protection. It also uses two independant layers of security to protect confidential data and deletes any important data after it has been processed. 3rd party audits have been commissioned to put the Enjin wallet’s security to the test.

One of the more interesting features of the Enjin wallet is that it is designed to hold multiple cryptocurrencies and fiat currencies. Currently it can hold BTC, LTC, ETH, ENJ and all ERC20 tokens, with plans to add support for other cryptocurrencies in the future. The wallet takes advantage of the EnjinX blockchain explorer to provide secure and detailed transaction information. The wallet is also capable of updating cryptocurrency price in real time and the app optimizes transaction fees. This makes it surprisingly well suited for cryptocurrency traders and not just Enjin Coin users.

Is Enjin Coin a good investment?

Enjin coin has a lot to offer users and investors. Unlike many younger cryptocurrencies it already has an established community with over 18.7 million registered gamers and millions of USD worth of Enjin Coin powered goods already for sale in virtual marketplaces around the globe. Enjin is also taking tapping into a market that is set to grow to $125 billion by 2020. Over 50% of this market growth will be driven by free to play games that are primarily funded via in-game purchases.

Enjin Coin (ENJ) is perfectly designed to fit into this market and they have taken care to slowly and carefully build up their product to ensure that it is secure, easy to use and bug free. Their product is attractive because it gives developers an easier way to monetize their games while also providing a useful service for gamers. Unlike many examples of monetization, for example the recent EA lootbox debacle, Enjin Coin has the ability to offer users something they actually want. An easy way to purchase interesting ingame content that can be traded and sold without any risk. In other words, with Enjin Coin everyone wins.

This also counts for investors. The long term growth potential of Enjin coins is impressive. Once the 100 million Enjin coins set aside for partnerships runs out the only way for developers to acquire new Enjin coin will be through cryptocurrency exchanges. This means that investors are likely to see greater demand for their coins as the market expands and should see a potential long term return.

ENJ is a very different sort of investment than something like Bitcoin. It is closer to investing in a startup and you should view it as something similar to a share. By investing in ENJ you are saying that you believe the company has long-term value. As such you should view any ENJ you buy as a long term investment and hold it so that you can profit as the ecosystem grows.

Enjin Coin represents a unique offering in the cryptocurrency world and is definitely worth the attention of both gamers and cryptocurrency investors.