There have been some impressive uses of blockchain technology over the last year. Everything from social media, to call consulting platforms, even website monetization is being disrupted by the blockchain. Most of these solutions rely on smart contracts to create novel solutions to complex problems.

The creators of FaithCoin were a group of Christian cryptocurrency enthusiasts who wanted to create a cryptocurrency that could be used by individuals, groups and non-profit organizations, facilitate payments, donations, trading and transfers without sacrificing their privacy or security. On top of this the FaithCoin smart contract will be embedded with bible verses so that it can help spread the word of god while being used.

In terms of the technology that powers it FaithCoin isn’t new. They have created an ERC20 token with a smart contract that specifically contains bible verses. They have essentially taken advantage of smart contracts in order to facilitate easy transference of the FAITH token by piggybacking on the Ethereum Network.

Their aim can be summed by the psalm mentioned in their whitepaper: Psalm 96:3

“Declare His glory among the nations, His marvelous works among all the people”. The primary purpose of the FaithCoin is to give Christians the opportunity to use a coin that they know shares their values and hasn’t been involved in any activities that they would consider to be immoral. 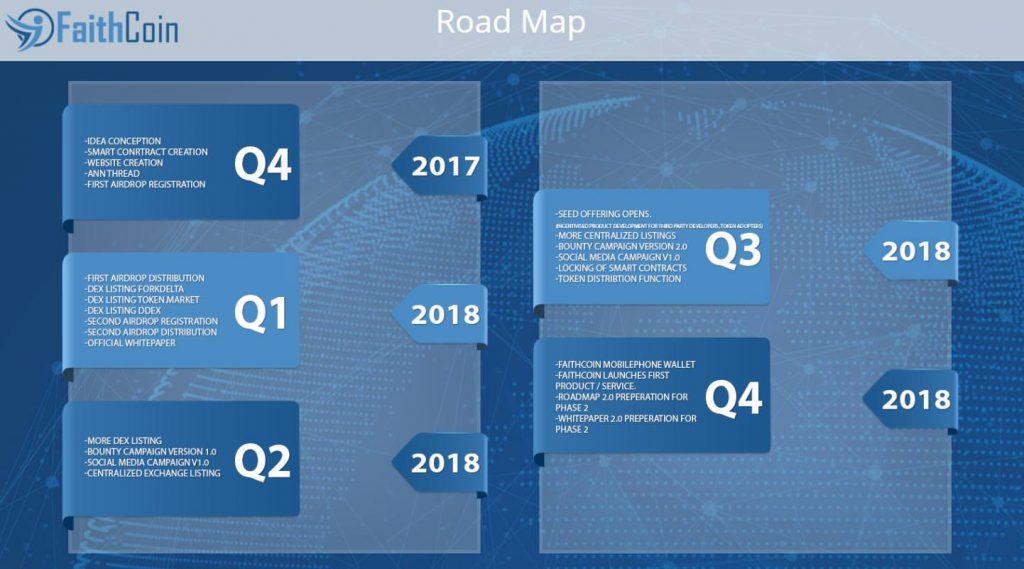 Rather than going straight to an ICO the FaithCoin team has opted to release around 20% (5 million) of all tokens in a series of airdrops to help spread the word of their cryptocurrency.  They will also be offering bounties to solicit third party help with developing the coin

FaithCoin Fits Into a Tradition Of  “Community” Led Cryptocurrency

The technology behind FaithCoin might not be particularly groundbreaking but the idea itself is worth looking at. In a strange twist of the fate the cryptocurrency most analogous to FaithCoin is probably actually Dogecoin. Yes, the coin based off a Shiba Inu meme.

Despite the fairly poor press Dogecoin has experienced in mainstream media DOGE represents one of the very few cryptocurrencies that is actually used as a currency. For a long time DOGE was (and still is in some circles) used as a way to “tip” other users for insightful or entertaining comments and posts.

Despite recent turbulence the Dogecoin community, or Shibes, is still going strong and their subreddit is highly active. Users still regularly tip each other with DogeCoin and the community has been largely ambivalent to the rise and falls in the value of DOGE. The Dogecoin community very much lives by the motto 1 DOGE = 1 DOGE, or; it doesn’t matter what the market does because we are trading Dogecoin for Dogecoin.

The creators of FaithCoin are very much building in the tradition of 1 DOGE = 1 DOGE. While they note in their white paper that the value of the coin will likely increase because of a fixed market cap that does not appear to be their primary concern. Rather they are interested in building a community that will want to use their coin because they believe in its message, which in this case is the word of god, in the form of bible verses.

In order to encourage more people to use their cryptocurrency the team has engaged in a series of free airdrops and they plan to continue doing so. They are also applying to have their coin listed on as many exchanges as possible, to ensure that it easy for anybody to use FAITH.

The final aim of the FaithCoin is to give people of faith a “moral” alternative to cryptocurrencies that might be used for purposes that a religious person might find uncomfortable. While the focus of FaithCoin is undoubtedly Christian the white paper makes it clear that they will welcome people of all faiths into their community.

According to the developers the response from communities around the world has been strong. People of multiple faiths have all participated in the airdrops and they firmly believe that the god they are praising is the same god, no matter what name it is given. Rather than being built to sustain a business FaithCoin is built to provide another way to spread faith around the globe and unite believers.

Should you invest in FaithCoin?

FaithCoin is a bit of a tricky one in that it’s not really a traditional investment. In the same way that Dogecoin is more about the DOGE community than it is about making money, FaithCoin is about building a like minded community who want to use a coin that is built on their values.

With this in mind let’s break down what gives FaithCoin its value. The underlying technology is nothing groundbreaking so FAITH can’t derive any specific value from that. Instead the coin’s value comes from the community that uses it. While this is true of most cryptocurrencies it is particularly important for FaithCoin, which is essentially attempting to establish itself as a “moral” cryptocurrency.

Rather than engaging in an outright ICO or presale the FaithCoin team have opted to engage in airdrops. These allow interested users to sign up to participate in an giveaway of FAITH coins. These aidrops have become increasingly popular and the 4th Airdrop in March had over 3,900 participants. This is to encourage more widespread use and coverage of their token. They also plan to have the token listed on as many decentralized and centralized exchanges as possible.

It’s a little early to talk about long term growth potential but you probably shouldn’t view FaithCoin as a traditional investment. Rather it is something that investors should be looking to acquire if they are interested in the community and message that underpins the coin. If you are interested in getting FAITH then you should sign up for the airdrops or purchase the token from an exchange.

Investors who are interested purely in disruptive technology or the opportunity to see huge gains in the long term should look elsewhere. FAITH is interesting but it isn’t designed to be a speculative asset.

Only time will tell what will happen to this odd cryptocurrency but Its creators clearly believe that their community has the faith to see it through.