Blockchain technology is at the forefront of the technology world and is without a doubt the way of the future. It blew up in a big way in 2017 and numerous cryptocurrencies and applications were created, with many more to come in 2018 and beyond. However, many of the blockchain technologies and platforms out there are broken or not suitable for people to use. They can be slow, expensive, and the speed of the transactions can often leave a lot to be desired. Also, many of the so-called “smart” contracts out there aren’t very smart at all. Businesses and entrepreneurs are looking for answers and while most of the current blockchain offerings out there are passable, they want something better.

One company and platform that is looking to be the solution to this growing problem is Universa.io. This article will take a closer look at Universa and how it works, why they believe they are superior and much more.

Universa is a new generation blockchain protocol, which has the potential to be a huge landmark in the evolving blockchain industry. They are claiming to be a faster protocol, a safer option and provide other improvements over traditional protocols out there that are used for smart contracts and transactions.

Most of modern blockchain technologies out there rely on the process of mining, which can be costly both in terms of price and time. While it is definitely still viable to mine, it isn’t always the best way. Instead, Universa is going to a newer way to create smart cash contracts in a more efficient and streamlined manner.

Also, while most platforms and blockchains transact in currencies, Universa will support the tokenization of anything from a title deed, to a boarding pass to a bus ticket. Anyone can make a tokenized version of anything, whether you are a business or an individual.

How Does Universa Work?

So how does Universa work? The answer is that they will use a thin protocol (while cryptocurrencies like Etherenum use a fat protocol). This means that each individual supplier or vendor will be able to provide their own local service within Universa, independent of others. This will allow for many benefits such as increased speed, less bloat and more. So instead of stacking blocks to make a single full ledger, like in a “fat” protocol, each set of changes to a contract is applied by the clients in a separate contract chain (“C-Chains”) and only a signature of the state of each side-chain gets updated as the new status of the blockchain, discarding the old state and storing the new one.

Don’t worry, each chain keeps its own history, and any node with a copy of the transactions can attempt to replay them and verify that the outcome is the same. This ensures everything is fair and accurate. If you are interested in learning more of the details about how Universa works and so much more about the project and platform, be sure to check out their whitepaper.

The Features and Benefits of Universa? 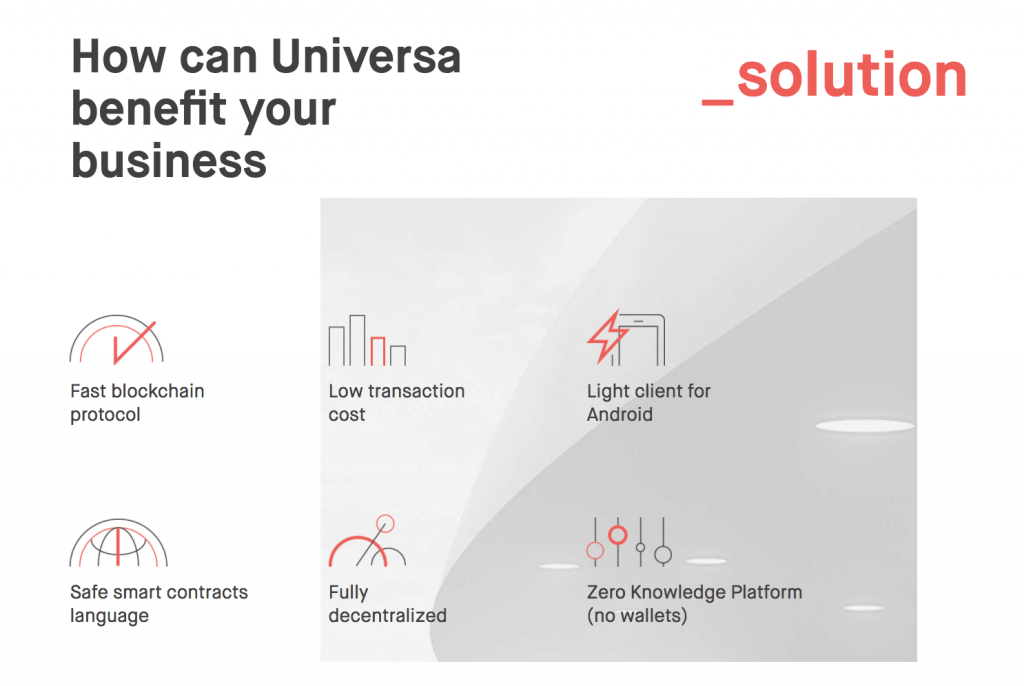 Now that you know a little about the technology behind the platform and currency, why do they believe it is better than the other blockchain options out there. Well, there are a couple of different reasons.

First and foremost, the team believes that their platform offers better scalability, which is one of the biggest problems plaguing the blockchain industry currently. As more people adopt and use the various blockchain-based coins, services and platforms, those coins, services and platforms have a hard time keeping up. Universa says they offer a speed that is 1000x that of Bitcoin.

Next, Universa claims to have a much lower cost than other blockchains. In fact, they can be up to 100 times cheaper than Bitcoin, according to their website! On the Bitcoin platform, there can sometimes be a multi-dollar transaction fee for only a few cents, which just doesn’t seem right.

The security for the smart contracts of Universa is also a large priority as they are aware that for a blockchain platform to really take off, it not only needs to work, but it needs to be extremely safe. Universa (and the smart contracts created in the platform) will also have a wide range of different applications and use-cases. These include logistics, cargo tracking, payments at parking lots and gas stations, IoT and much more. As mentioned earlier, it is a very customizable platform.

As with most blockchain-based platforms, there is a token within the Universa ecosystem, and it is UTNP. Being that they just had their ICO finish in late 2017, the token is still quite new and hasn’t been on the market for too long. These tokens will be needed to use the platform, to make smart contracts, to pay transaction fees and more. The use of these tokens will also help to sustain the ongoing development of the platform.

The Team at Universa 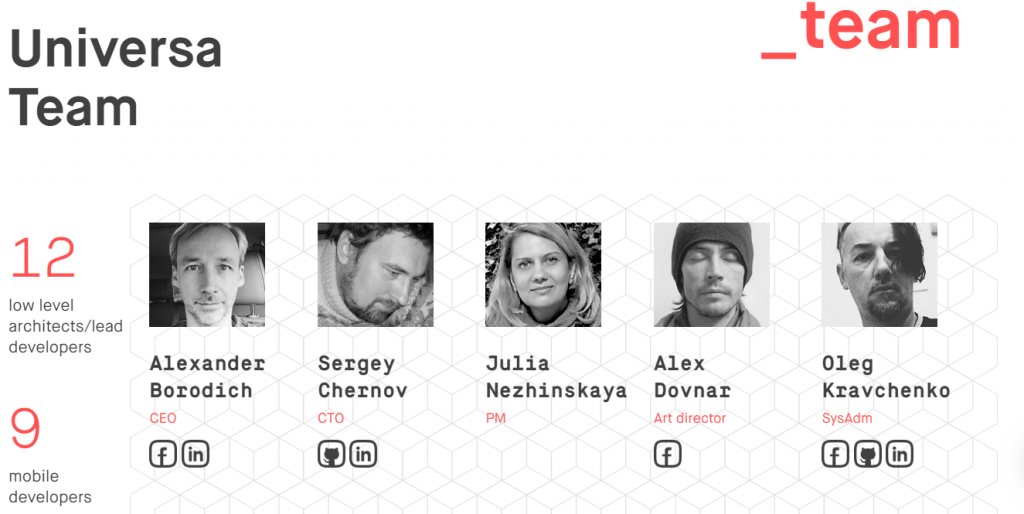 The team at Universa is led by CEO and visionary Alexander Borodich. He is a serial entrepreneur and angel investor (with around 100 start-ups in his portfolio as of the writing of this article) and he has earned an 8X ROI for his investments. He is very hopeful and ambitious for Universa and brings a lot of experience and knowledge to the team.

In addition to Borodich, the team features Sergey Chernov as the CTO. He has nearly two decades of experience as a software developer and has held leadership positions at large firms and companies in the past. In addition to their leadership, the Universa team is made up of several other developers, architects, managers, designers and more.

In conclusion, Universa is hoping to be the future of customizable blockchains. They have a solid foundation behind them, and the team is an impressive one. However, they are still quite young and just had their ICO in late 2017, so only time will tell if they are successful or fade away like so many other blockchain projects. While blockchain is still in its infancy as well, there are definitely some room for improvements and look for more platforms out there like Universa to try be the solutions to the problems blockchain is currently battling.